My lovely friend Karen, who also happens to be Jewhurst's cousin, mentioned on Facebook the other day that she had some cooking apples and planned to make apple crumble with them. I asked if she wanted to write a post about it for this blog, and here it is! 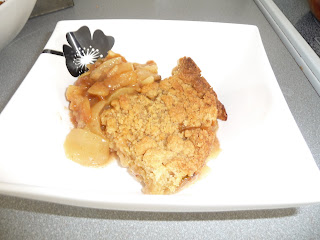 Before I start into this post I feel that I should explain my rather impromptu decision to make an Apple Crumble this weekend.

My mum always used to make a Chicken Waldorf Salad, which I absolutely love. (For those who maybe don’t know what a Waldorf Salad is, it’s basically chicken, celery, apples, in a mayo/sour cream sauce) She said she was making it recently, which inspired me to get the recipe and try it out myself… This was one of those times when you completely regret starting something! I messed up the sauce by getting the quantities wrong and making too much, I managed to salvage this by putting extra soured cream in to disguise the tanginess of the mayo. I turned to the apples which I was about to chop and thankfully glanced a the recipe again, the recipe called for dessert apples…..I’d bought cooking apples, and so the crumble was made to not waste ingredients.

I was very lazy and didn’t even go to my cupboard to get a recipe book instead I went online, did a little google and decided to try the BBC food apple crumble recipe. I had all the other ingredients in the cupboards so started giving it a bash.

The ingredients are as follows:

Knob of butter for greasing

I made mine with 4 medium sized apples, I didn’t weigh them, but there was an ample layer of apple, which I personally prefer in a crumble.

Place the flour and sugar in a large bowl and mix well. Taking a few cubes of butter at a time rub into the flour mixture. Keep rubbing until the mixture resembles breadcrumbs.

Place the fruit in a large bowl and sprinkle over the sugar, flour and cinnamon. Stir well being careful not to break up the fruit.

Butter a 24cm/9in ovenproof dish. Spoon the fruit mixture into the bottom, then sprinkle the crumble mixture on top.

Bake in the oven for 40-45 minutes until the crumble is browned and the fruit mixture bubbling.

Serve with thick cream or custard. 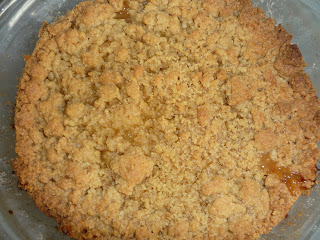 I actually did step two first and peeled and chopped the apple into the Pyrex bowl. I wasn’t sure how they meant you to cut/chop the apples so I cut them into very thin slices, and then chopped the slices again into thin slivers.

I sprinkled the mixture over the fruit in the Pyrex bowl, which worked perfectly fine. The recipe called for a ‘pinch of ground cinnamon’, I put a good sprinkle in as I personally love it! It had a great taste and next time I would probably add a touch more.

I then went back to step one and made the crumble mixture. My scales aren’t 100% and I think in mine, I had a touch too much butter. The crumble wasn’t exactly crunchy throughout, it was more soft in places and almost ‘cake like’, as my husband put it, however, it didn’t take away from it and was still very tasty.

Overall, this was extremely tasty and went down a treat. My husband and I both thoroughly enjoyed it and took the remainder to the in-laws to taste. I think if I was doing it again, I would definitely add in a touch more cinnamon but as mentioned that is because I love the taste. I would maybe use slightly less sugar throughout the recipe as it was quite sweet, so maybe cutting out some of the sugar in the crumble rather than less in with the apple mixture. I’d also advise putting the butter in, in stages as I can’t say whether the recipe tells you to use too much. – I think after this I’m going to ditch those scales and get some proper ones which actually work!

I’d highly recommend you try this simple, but yet classic dish! A tasty treat for a Sunday afternoon. 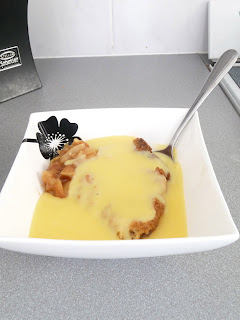 My thanks to Karen for doing this post. The crumble does look amazing! (I'm also liking her crockery too!)

If you have a favourite recipe you would like to post on the Big Eejit email me (details on the Contact page) and let me know.

Comments make me happy! I'll try my best to reply to you all :) xx