It's pies this week on Reluctant Housedad's Recipe Shed, which worked perfectly with our plans for a chicken and ham pie that we'd been thinking of making for a few weeks!

My mum did us a joint of ham at Christmas - my mum's Christmas ham is legendary. She roasts it with honey and cloves, and then makes the most incredible lentil soup with the stock. Unfortunately (or not, depending on how you look at it) she made rather a lot and we had quite a few slices left over even 5 days later. So we threw them in the freezer and set about finding a way to use them up.....and discovered this. It's a Good Food recipe, tweaked a bit to suit our tastes and storecupboard.

Put 6 cubed chicken breasts in a large pan, along with 3 or 4 cubed potatoes, and a variety of veg (we used frozen peas and sweetcorn but carrots, broccoli or celery would work as well). Add 800ml hot chicken stock, dried herbs, and seasoning. Bring to the boil, then simmer for 15 minutes.

Place a colander over a large bowl and drain the contents of the pot. Reserve 1 pint of the hot stock and put the chicken and veg to one side. Rinse out the pot and melt 50g of butter. Add 2 chopped onions and cook out for 5 minutes. Stir in 50g plain flour then begin to add the hot stock a little at a time to make a smooth thick sauce. We used the full pint but on reflection it made the sauce quite watery so perhaps don't use it all. Add 300ml milk and simmer for 5 minutes.

Take the pot off the heat and stir in the juice of a lemon. Put the chicken and vegetables in a large pie dish, along with as much cooked ham as you fancy (we used 4 large thick slices) and cover with the sauce, allowing to cool for a while.

Preheat the oven to 200degC. Take a 500g pack of ready rolled shortcrust pastry (or be really virtuous and make your own) and place it over the top of the pie dish. Add a few steam holes and decorate with pastry leaves, if you are so inclined!

Bake in the oven for 30-40 minutes. We had this on its own but to make it go further you could serve it some more veg, or (Jewhurst's suggestion) chips....! 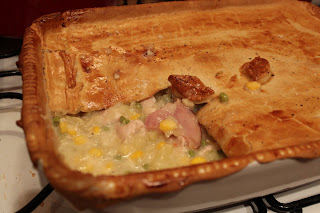 Isn't it a beaut? It tasted AMAZING. The clove from the ham gave it a nice warmth without overpowering it, the chicken was tender and the potatoes gave an interesting texture to the filling. I also thought that perhaps the filling could be made in the slow cooker to really intensify the chicken and vegetable flavour.
Have a look at some other pies on Reluctant Housedad's blog. What's your favourite pie?

Comments make me happy! I'll try my best to reply to you all :) xx